Located on the southeastern coast of the Florida peninsula within the three cities of Fort Lauderdale, Hollywood and Dania Beach, as well as unincorporated Broward County. Port Everglades is not actually part of the wetland ecosystem known as the Florida Everglades. It is one of the most diverse seaports in the United States, as well as a very busy cruise port. Cruise vacations and international trade are what makes Port Everglades the the economic powerhouse that it is in Broward County.

Port Everglades is ranked second among cruise ports worldwide and has more home-ported cruise ships than any other port.

Global Entry is a U.S. Customs and Border Protection (CBP) program that allows expedited clearance for pre-approved, low-risk travelers upon arrival back in the United States. Upon debarkation, signage will direct cruise guests who are Global Entry participants to the front of the line in all cruise terminals.

Travelers must currently be enrolled in the Global Entry program and have gone through the approval process. All applicants undergo a rigorous background check and in-person interview before enrollment. While Global Entry’s goal is to speed travelers through the process, participants may still be selected for further examination.

Port Everglades is set apart by many things. Namely, in 2015, more than 3.7 million passengers visited the port. It holds the distinction of being named “2013 Best Domestic Port” by Porthole Cruise Magazine and was selected as “World’s Top Cruise Port” in 2013 and 2010 bySeatrade Insider. During 2015-2016 cruise season, it set multiple records for the number of cruise guests passing through the port in a single day.

There are 9 cruise lines, 1 ferry service and 34 cruise ships servicing the Port. 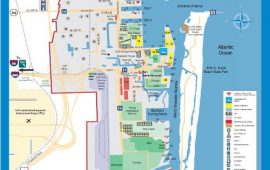 Located on the southeast coast of Florida, Port Everglades is accessible by car, taxi, bus and rail.

– The 17th Street Causeway entrance which is located at Eisenhower Boulevard

Port Everglades is the only cruise port in the U.S. located adjacent to an international airport.

How to Pack for a Cruise

No matter whether you tend to [Read More...]